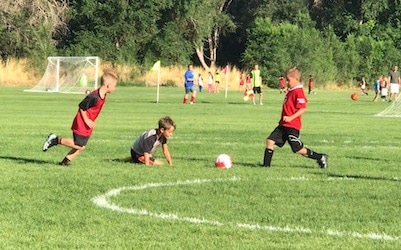 For many years I coached my Grandson – Jackson in soccer. Unfortunately, I was not able to coach him this particular season. The other day I watched anxiously from the sideline while he played. He is a natural athlete and was having a great game. However, the coach inside of me started to emerge and I found that there was something really important I wanted to tell him that would help him gain a significant competitive advantage.

After that, I called him over to me and I intended to tell him my observations, all to help him of course. However, as he came towards me something happened. I suddenly changed my mind and refrained from giving any advice or criticism. I simply gave a high five and said, “I wanted to say great job.”

He smiled and he ran back onto the field with energy.